System Model for a Multi-core Processor 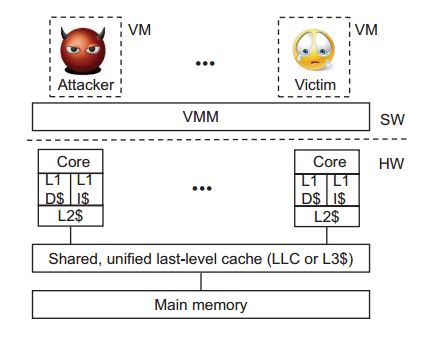 Because of the long access time of main memory compared to fast processors, smaller but faster memory, called cache, are used to reduce the effective memory time as seen by a processor.

A typical L1 cache size is 32KB with 4-cycle access time, as in Intel Core and Xeon families.

The LLC is shared among all cores of a multicore chip and is a unified cache, i.e., it holds both data and instructions. [1]
LLC sizes measure in megabytes, and access latencies are of the order 40 cycles.

Any memory access first access the L1 cache, and on a miss, the request is sent down the hierarchy until it hits in a cache or accesses main memory.
The L1 is typically indexed by virtual address. While all other caches are indexed by physical address.

Reference [1]
To exploit spatial locality, caches are organized in fixed-size lines, which are the units of allocation and transfer down the cache hierarchy.
A typical line size B is 64bytes.
The log2B lowest-order bits of the address, called the line offset, are used to locate a datum in the cache line.

Caches today are usually set-associate, i.e., organized as S sets of W lines each, called a W-way set-associative cache. As shown in the following figure.[1]
When the cache is accessed, the set index field of the address, log2S consecutive bits starting from bit log2B is used to locate a cache set. The remaining high-order bits are used as a tag for each cache line.
After locating the cache set, the tag field of the address is matched against the tag of the W lines in the set to identify if one of the cache line is a cache hit.

As memory is much larger than the cache, more than W memory lines may map to the same cache set, potentially resulting in cache contention. If an access misses in the cache, and all lines of the matching set are in use, one cache line must be evicted to free cache slot for the new cache line being fetched from the next level of cache or from main memory for the LLC. The cache’s replacement policy determines the line to evict. Typically replacement policies are approximations to least-recently-used (LRU). [1]

[1] Modern Intel processors, starting with the Sandy Bridge microarchitecture, use a more complex architecture for the LLC, to improve its performance.

The LLC is divided into pre-core slices, which are connected by a ring bus. Slices can be accessed concurrently and are effective separate caches, although the bus ensures that each core can access the full LLC (with higher latency for remote slices).

Reference [1]
Translations from virtual pages to physical frames are stored in page tables.
Processor cache recently used page table entries in the translation look-aside-buffer (TLB).
The TLB is scarce processor resource with a small number of entries.
Large pages used the TLB more efficiently, since fewer entries are needed to map a particular region of memory. As a result, the performance of application with large memory footprint, such as Oracle database or high-performance computing applications, can benefit from using large pages.
For the same reason, VMMs, such as VMWare ESX and Xen HVM, also use large pages for mapping guest physical memory.

[1] Covert channels and side channels are two types of information leakage channels. A covert channel uses mechanisms that are not intended for communications, e.g., writing and checking if a file is locked to convey a “1” or “0”.
In a covert channel, an insider process leaks information to an outsider process not normally allowed to access that information. The insider (sending) process could be a Trojan horse program previously inserted stealthily into the computer. An outsider (receiver) process need only to be an unpriviledged process.

[1] Covert and Side Channels due to Processor Architecture, by Zhenghong Wang and Ruby B. Lee, in ACSAC 2006

[1] Cache load measurements create very effective covert channels between cooperating processes running in different VMs.
In practise, this is not a major threat for current deployments since in most cases the cooperating processes can simply talk to each other over a network.
However, covert channels become significant when communication is forbidden by information flow control (IFC) mechanisms such as sandboxing and IFC kernels. The latter is a promissing emerging approach to improving security (e.g., web-server functionality).
[1] explains more on the covert-channel in Section 8.1.

[1]  Hey, You, Get Off of My Cloud: Exploring Information Leakage in Third-Party Compute Clouds, by Restenpart, T. et al., in CCS09

[1] demonstrates how to utilize the Prime + Probe technique to measure the cache activity, and extend it to the following Prime + Trigger + Probe measurement to support the setting of time-shared virtual machines.

When reading b/s memory locations in B, we use a pseudorandom order, and the pointer-chasing technique to prevent the CPU’s hardware prefetcher from hiding the latencies.
The time the of the final step’s read is the load sample, measured in number of CPU cycles. These laod samples will be strongly correlated with use of the cache during the trigger step, since last usage will evict some portion of the buffer and thereby drive up the read time during the probe phase.

[1] Hey, You, Get Off of My Cloud: Exploring Information Leakage in Third-Party Compute Clouds, by Restenpart, T. et al., in CCS09

Reference
[1]  Hey, You, Get Off of My Cloud: Exploring Information Leakage in Third-Party Compute Clouds, by Restenpart, T. et al., in CCS09
[2] Using Virtual Machine Allocation Policies to Defend against Co-resident Attacks in Cloud Computing, by Yi Han et al, in Transactions on Dependable and Secure Computing

When a user request for a virtual machine in the cloud, the cloud provider needs to allocate a VM for the user.

There are three concerns a cloud provider needs to take into account when doing the VM allocation. 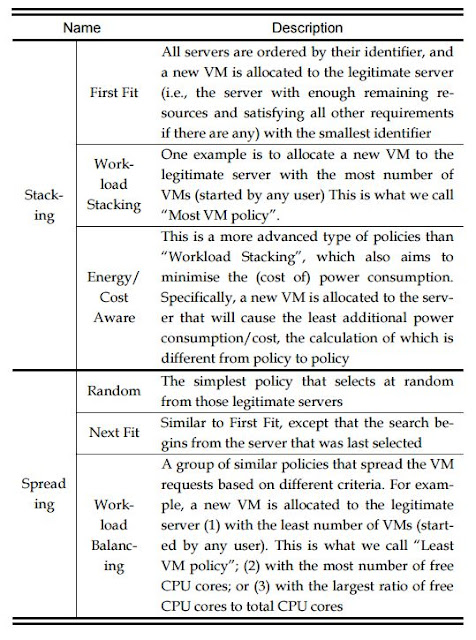